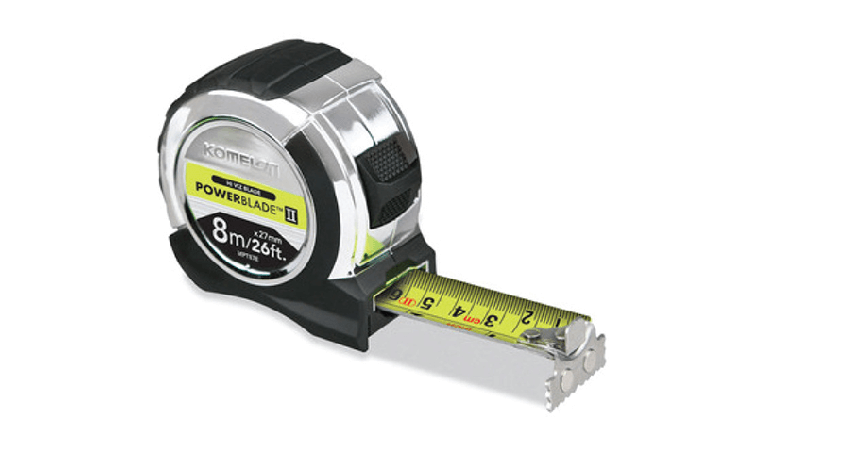 The Komelon PowerBlade. Available in 5m/16ft, 8m/27ft. It features a magnetic, true zero end hook which is secured by three rivets. The tape features a nylon coated, hi-vis blade that has both metric and imperial scales printed both sides of the blade with vertical markings. The blade also has rounded edges and rubber grip. It has guaranteed Class 2 accuracy.

Great tape measure, solid easy to use.It is brightly coloured and well marked on both sides.Good magnets on the well shaped hook,so far it’s not that big that it catches on everything.

Got one of these from a competition on Expert trades. The front measure is ideal for lengths & the rear being horizontally marked is ideal for measuring heights, ie door frames etc. Its bright, strong and can take a bashing! Well impressed.

Love this tape measure it's robust accurate strong and a great piece of kit to add to your tool box.ive bought a few of these and issued them to my staff and every one of them loves this tool

I have to say that I will not be buying this tape, having tried it it's a really good tape apart from the weight I need a lighter one. It feels nice and solid, the tape itself is a good quality with smooth edges. Very easy to read on both sides which is so convenient a great feature. I would like a magnet on the end of all my tapes. Definitely try it if you like it buy it .

Fantastic tape, nice length , doesn’t do any half measures. Right weight and colour . Not short of a good clip either. Yea perfect for the job,

i've always used other tape measures and they don't last long. I've recently purchased the Komelon powerblade and i'm never changing back its strong easy to use and comes with a very neat belt clip which makes it even easier to use and keep close

Got this asbpart of the blue box deal. I am particularly impressed with the build quality and clarity of the scale. Has taken no1 slot in my collection of tapes. An all metric one would be great

Excellent tape for any trade, the tip makes it excellent for scribing a mark, the rubber grip gives for a superb fit, the magnetic tip comes in handy on longer measurements. Worth the money.

A1 tape. Very rigid blade and easy to read. The hook is triple riveted and reinforced. Withstands a drop or to as well!

Cracking tape to use. Sizes on both sides of the tape make it easy to use. Markings are very easy to read. Strong case and the tape itself is very rigid for measuring by yourself. Would recommend this tape to anyone. Excellent value for money

Got one of these tapes in the blue box offer, fantastic tape measure, can measure long distances with out it being all flimsy and easy to read with it being printed on both side

Brilliant tape measure. Very strong for measuring across a distance. High visibility and it's printed on both sides which makes it easy to read.

Brilliant tape measure. Very strong for measuring across a distance. High visibility and it's printed on both sides which makes it easy to read.

Brilliant tape measure, really nice to use, the high vis blade makes it better to see. Very comfortable and reliable not easy to bend outlasted other tape measures I’ve had

Best tape I’ve had! Got one from the band of builders... had it 12 months and been wet through no problems with it

Got one of these in my blue box. Great chunky tape. Actual tape itself isn't flimsy, easy to read and handy being printed on both sides.

Excellent tape measure, big and easy to use. The hivis blade makes it easy to read, would defiantly recommend this tape.

Nice BIG tape, well made and some good features printed both sides, magnetic end... Good value as some of the big brand tape measures are well expensive!

I received this tape in my blue box and have been trying it since on site, great taps, magnetic end, good build quality. Has reversalile tape and the high vis tape makes it easy to see when there limited light on site. Would recommend and will use from now on.

Got this tape on a tool talk deal for £8 what a bargain for such a high quality tape , sturdy, magnetic catch, double sided this one is a winner. It even better when coupled with the komelon quick draw system!

Absolutely the best tape I've ever had. The day I loose it will be a sad day. Love it for measuring flues through the wall as can use both sides of the tape.

Great tape, easy to read in low light and the scale on both sides helps when measuring boiler flues. Managed 2.65m extension before it dropped

Great tape measure easily the best I've had I was sick of my old one kinking and landing on my head when measuring staircases this one is really strong and sturdy so will do the job fine.

An excellent tape, very good quality which should last a lot longer then other makes

What a brilliant tape measure. The thing is heavy duty and bulky but that is to be expected at 8m. The hi-viz tape makes it very easy to read in low light. And the most important thing I got to over 2m seeing how far it would stretch out before snapping.

Great tapes I would choose these over Stanley any day great tapes great value for money. Highly recommend. Robust and well made very clear to read even I awkward places.

Brilliant little tape, measurements on both sides and high vis which makes it easier to ise

Good quality tape. Easy to read and doubled sided is helpful. Not the thickest of blades. have had to have someone to hold it a few times

Good quality tape measure with measurements both sides .easy to read and a positive lock

The nicest, smoothest and most well made tape iv picked up.

After losing my self lock one I tried this. It's very well built although a bit heavy. I preferred the self lock one but this is still very good

Great tape, accurate, compared against a leica disto. Overall a well made tape.