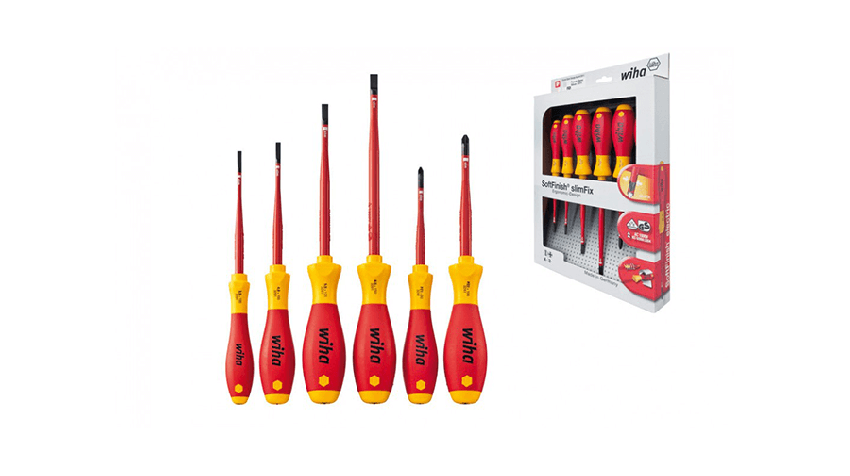 I have used every type of screwdriver and these are up there, liking the slimfit for all the cheap Chinese electrical copies brought from ebay/amazon that do not meet any BS reg.

Used these for couple of years and then bought a different brand and regretted it. These are the best screwdrivers available in my opinion and certainly not the most expensive. They are comfortable and last well.

Pick up a set from Screwfix great piece of kit,the slim insolation work well on them very tight terminal but the metal needs to be a little bit more stronger.They are great value for money

very good product and well worth the money. these screwdrivers are probably the best priced VDE screwdrivers on offer. we have used for many months and unlike some cheaper ones that seem to break on the ends. these have lasted.

After having owned every screwdriver set on the market I have to say this set has to be the best value for money. Lasted well over a year in my toolbag and still have plenty of life left!

I just got this set and love them, feel great and very good quality . I use this set over my others as they are just great to use

My go to screwdrivers, nice in the hand and last longer then most. Very happy and would recommend them. It pants that it’s a minimum of 140 characters as that means I have to make up random stuff that’s not relevant to the review.

Great set of screwdrivers, very good value for money and can be easily replaced. I’ve had a few sets already due to loosing them but other than that they are perfect. Better grip than other manufacturers.

These are a great set off screw drivers they feel good in your hand and have do what they are supposed to do. I would recommend this set of screw drivers. At the price i payed they are great value as well..

I bought these because I had had single units. They are great for getting into those tight spaces. With the slim design they really can reach in well. Find them comfortable to use and with the different size flat screwdriver it’s easy to get the right one god the job. Just love them for the quality.

The Wiha soft finish mixed VDE screwdriver set is the best going yet and you’ll find every electrician will have them. Had them for years and still do the job.

Great screwdriver set that fits comfortably in my hand. Tough insulation and these slim line design allows them to fit all terminals even the deep ones. They are very hard tipped so stand up to a lot of use without rounding. I have managed to snap the tip on one but only because I could not be bothered to get the right sized one out of my tool box. Highly recommend these.

I’ve bought a couple of these sets over time. They are comfortable to use. I like the slim insulation as they fit into some recessed places that can cause a problem otherwise. They are good value, so although it can be annoying loosing one, which seems to happen more often than it should! It not so expensive to replace one. The tips do wear well and I can be pretty hard on the main sizes I use. So all in all I’d highly recommend them.

These are my go to screwdrivers, the quality to cost ratio is perfect. I loose a lot of screwdrivers so I don't want to spend a fortune but I also need a quality screwdriver. The tips are nsttong and don't slip. No complaints from me

Great driver set I’ve had 3 sets of these so far. Mainly due to my strange ability to lose them in ceiling voids and floor voids. Comfortable grip and good strong driver heads I’ve had other sets that snap when tightening screws/terminals etc which is very annoying but not these!

Brilliant screwdrivers the tips are strong and very comfortable to use, the slim shaft is a great feature and are a great price

Excellent screwdrivers. I got a set of these when we’re on offer in screwfix and not gone back. Keep getting them if they are on offer as they are very comfortable to use and grip, solid built

Nice set of screwdrivers. Have a set of these and Wera and like them equally. Slim insulation makes getting into terminations easier. Comfortable handles. Ends have stood up to a bit of abuse.

Good value for money screwdriver set. Solid and compact with plenty of grip. Would recommend these for any trade.

Great set of screwdrivers reasonably priced and feel great to work with. Have had a couple of sets now but only due to losing them haven’t had any break.

For a cheap/ mid level set of screwdrivers, been using mine for a couple months, these are very good bang for your buck, feel nice in the hand and do everything you would expect

Nice set of screwdrivers, nice grip and comfortable to use. I had use of these when working with another spark's who told me to try them. As with most thing's i think it is down to personal preference and i am happy with the brand i use but would change to these when the time comes.

I got a set of these screwdrivers a couple of months ago and have managed to brake the terminal screwdriver very quickly. This is the main one in the set that I use and need daily, so when it broke I had to go get a new one and screwfix only had this brand again so had to get the same one again. And another month later this one broke. But you get a years waranty with these screwdrivers so that got changed for free. I'm one my 3rd one and hopefully this one will not brake.

I love these screw drivers. I’ve been using them for about a couple of months now. Grip on the handle is nice, certainly feels better to hold than a lot of other brands

The grip is really nice to have, They are reliable and strong and easy to find. Not out of place in any tool box or van. Not too expensive either.

Used to use other brands until i found these.....No.1 choice now! cant fault them. defiantly worth spending the little extra money on the Slimfix too

Nice feel to these screwdrivers, but the choice of tips didn’t suit what i used to drive in, ie the philips seem to not fit a certain type of screws , but that isn’t a knock on screwdrivers, more it didn’t suit me.

Don’t know what theses drivers are like personally but CEF are selling them for 17.50 plus the vat for 5 piece and Screwfix are selling the same one but a 6 piece for 15 quid it’s a no brainier just thought I would share with you all

I have brought tones of these screwdrivers for spares. They are very very good and have lasted very well. The soft finish of them are lovely on your hands and very comfortable. The slim shaft also makes the good for RCBO’s

Got these after my tools got nicked had the wear set before. Can’t decide which I prefer. Only time will tell

One of the best screwdriver sets I’ve ever used, great value for money especially if you get them when they’re half price in screwfix. Last for ages, used for about 2 years and never had one snap on me, but then moved on to Klein.

Picked up a set of these when they were on offer in electricfix, normally use wera, although I'm pretty impressed with the build quality of these drivers.

Brilliant set of electrical screwdrivers, brilliant quality and seem to be very strong and comfortable to grip. Definitely recommend

Brought these as single screw drivers to go with a collection of older C.K ones, now these are my go to screwdrivers made really well and feel very nice in the hand would recommend every time.

All there tools are the best on the market, only my view, you get what you pay for, good strong design that are built to last

Really nice set, long lasting, the slim design make it easy to undo screws that are in slim spaces. They are a good screw driver for the cost.

Same as all vde screwdrivers the terminal eventually gave up. I gave them some stick though and most are still going.

Well priced and very comfortable in the hand. The slim shaft makes them ideal for those harder to reach areas.

Good cheap screwdriver set that pulled me out of a hole. Very happy with them. They are good for getting into narrow holes which my other sets cant.

For a cheap set of drivers these are perfect. Problem is they do tend to snap with too much pressure. Can't complain though as they have served me well

For a cheap set of screwdrivers I can't complain. As an electrician I really do wish that manufacturers would improve the build quality of the 3.5mm screwdriver. So prone to snapping

Great set of screwdrivers. Strong and the skin shaft is ideal for isolators. Usually grab a set when they on offer

Good set of drivers, good length compared to other brands making them easier to use. So far no snapped heads

Picked up a set from Screwfiw. Not the cheapest but 100% worth the money. Real comfy on the hands to.

Great screwdrivers. Perfect for getting into rcbos and control boards etc. The smaller flatheads bend and twist but can bent back to straight. I always. You a set when they are on offer

Quality made and good range of sizes have a comfortable grip shame they didn't come with a carry case.

Expensive but worth it. Heads seem solid and you can put a bit of turn on these. If they last then the pay back will be worth the extra money.

Nice comfy screwdriver set fits in your hand easily gets the job done. The smaller slotted screwdrivers not very sturdy and twist but good value for money for the set.

I have had my screwdrivers for 7/8 years now, they are definitely the best screwdrivers on the market, I always use VDE driver just for my own safety and these are the best

I have a driver I won in a competition I use it daily and will be purchasing a full set soon. great for terminals

I won the smallest straight driver in an expert trades competition. I have used it daily and not always for it's intended purpose and it hasn't broken yet. I am so impressed that I purchased the set last week. Great quality and feel when using.

A good set of screwdrivers, had to replace to as I lost them

Very comfortable grip ideal for small access holes, broke the pozi2 driver had to replace it

Bought another set of these, im not a sparky but they are perfect for service/breakdows etc. Good tools

Super screwdrivers, comfortable, robust and easily purchased as Screwfix are a stockist. I have more than one set of these and would highly recommend them.

Great screwdrivers will be purchasing a full set after using one that I won on competition. Sturdy German build quality

Hey bud - what do you mean? So we can see average prices / good deals?